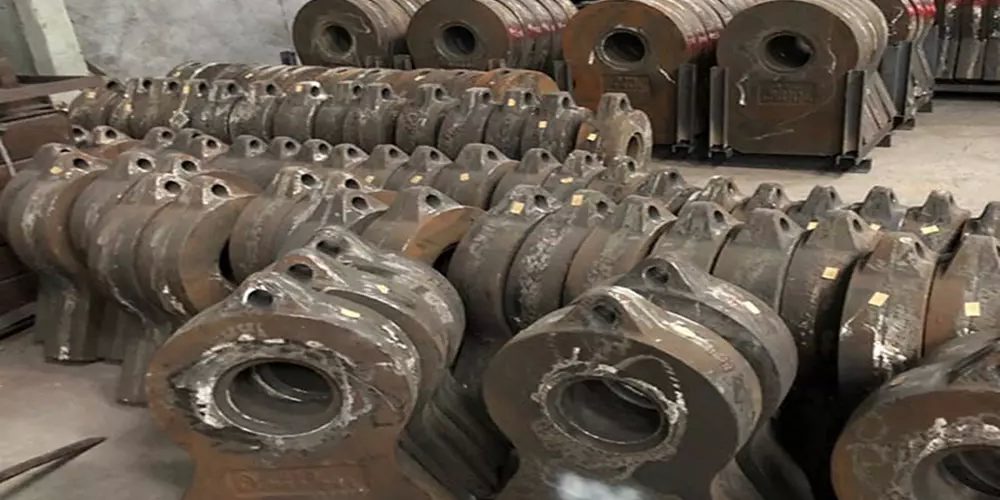 Carbon is one of the two most important elements in manganese steels along with manganese. Manganese steels are a supersaturated solution of carbon. For most standard manganese steel grades the carbon and manganese are in an approximate ratio of Mn/C=10. These steels, therefore, are typically 12% Mn and 1.2% C. This ratio
was mainly set up by early steel-making limitations and the fixed ratio has no real significance. Increasing the carbon content raises the yield strength and lowers the ductility. See the following pictures for the effects of increasing carbon content on the properties of 13% manganese steel. 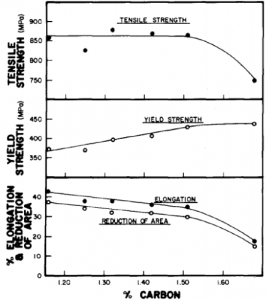 Effect of carbon upon the tensile properties of manganese steel 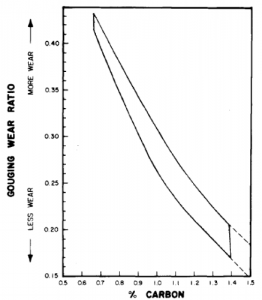 The main significance of increased carbon content though is to increase the gouging wear resistance, see above pictures. Most manganese steels are used in gouging
abrasion and high impact wear situations so manufacturers try to maximize carbon contents. Practical limits do exist and as the carbon content exceeds 1.3% cracking and
undissolved grain boundary carbides become more prevalent. The premium grades of manganese steels, those with high manganese contents, have pushed the upper
carbon limit well beyond 1.3%.

Manganese is an austenite stabilizer and makes this family of alloys possible. It decreases the austenite to ferrite transformation temperature and therefore helps to retain a fully austenitic structure at room temperature. Alloys with 13% Mn and 1.1% C have martensite start temperature below -328°F. The lower limit for manganese content in plain austenitic manganese steel is near 10%. Increasing manganese levels tend to increase the solubility of nitrogen and hydrogen in the steel. Premium alloys with higher
carbon contents and additional alloy elements exist with manganese levels from 16-25% manganese. These alloys are proprietary to their manufacturer.

Silicon contents up to 1% are typically considered safe in manganese steels, but the silicon exerts no noticeable influence on the mechanical properties. At 2.2% silicon
content, Avery has shown a sharp reduction in strength and ductility. Most of the reported experimentation has been done with small section sizes of less than 1 inch,
when considering silicon content and heavier section sizes the impact strength can be severely decreased with increasing silicon contents. See the following picture for the effect of adding 1.5% Si to a 6-inch section size. The data shows a 75% reduction in impact energy when the silicon is increased to this level. It is recommended to keep the silicon levels in manganese steel low, to less than 0.6% silicon when producing section sizes over 1 inch.

Chromium is used to increase the tensile strength and flow resistance of manganese steels. Additions of up to 3.0% are often used. Chromium increases the solution-annealed hardness and decreases the toughness of the manganese steel. Chromium does not increase the maximum work hardened hardness level or the strain
hardening rate. Chromium-bearing grades require higher heat treatment temperatures as chromium carbides are more difficult to dissolve into solution. In some application,
chromium can be beneficial, but in many applications. there is no benefit to adding chromium to manganese steel.

Nickel is a strong austenite stabilizer. Nickel can prevent transformations and carbide precipitation even at reduced cooling rates during quenching. This can make nickel a useful addition in products that have heavy section sizes. Increasing nickel content is associated with increased toughness, a slight drop in tensile strength and has no effect on the yield strength. Nickel is also used in welding filler materials for manganese steels to allow the as-deposited material to be free from carbides. It is typical to have lower carbon levels in these materials along with the elevated nickel to produce the desired result.

Molybdenum additions to manganese steels result in several changes. First, the martensite starts temperature is lowered which further stabilizes the austenite and retards carbide precipitation. Next, molybdenum additions change the morphology of the carbides that form during reheating after the material has had a solution treatment. Grain boundary films of acicular carbides typically form, but after adding molybdenum the carbides that precipitate are coalesced and dispersed through the grains. The result of these changes is that the toughness of the steel is improved by the addition of molybdenum. Another benefit of molybdenum additions can be improved as-cast mechanical
properties. This can be a real benefit during casting production. In higher carbon grades molybdenum will increase the tendency for incipient fusion, so care must be taken to
avoid this as the resulting mechanical properties will be severely diminished. Molybdenum is beneficial when very heavy section thicknesses are to be produced in manganese steel. These are sections that are in excess of 6 inches and especially those that are over 10 inches in section size. These section sizes can be found in large
primary gyratory crusher mantles and thick jaw die castings. For these castings, it is recommended to add molybdenum in the range of 0.9% to 1.2% while reducing the
carbon content to 0.9% to 1.0%.

Aluminum is used to deoxidize manganese steel, which can prevent pinhole and other gas defects. It is typical to use additions of 3lbs/ton in the ladle. Increasing aluminum
contents decreases the mechanical properties of manganese steel while increasing brittleness and hot tearing. In practice, it is advisable to keep aluminum residuals fairly
low for most grades of manganese steel. New materials that contain high levels of aluminum and approximately 30% manganese are being developed for high strength, weight-sensitive applications. In these cases, the low density of the aluminum is being used to lower the density of the resulting alloy.

Titanium can be used to deoxidize the manganese steel. In addition, titanium can tie up nitrogen gas in titanium nitrides. These nitrides are stable compounds at steelmaking temperatures. Once tied up the nitrogen is no longer available to cause pin holing in the castings. Titanium can also be used to refine the grain size, but the effect is minimal in heavier sections.

Phosphorus is very damaging to manganese steel. It forms a weak phosphoric eutectic film at the austenite grain boundaries. Phosphorous is difficult to remove from manganese steels and the most effective method to control it is careful selection of charge materials. ASTM A128 calls out a phosphorous maximum of 0.07%, but it is
recommended to keep the phosphorous level well below this level when producing high-quality manganese steel.

Sulphur, while not a benefit in most steels, causes few problems in manganese steels. The high manganese levels keep the sulphur tied up in manganese sulphide inclusions of the spheroidal type.

Boron has been used to try to produce grain refinement in manganese steels. As boron levels increase, however, a brittle boride carbide eutectic is precipitated at the grain
boundaries. Boron also accelerates the decomposition of the austenite if the manganese steel is reheated, which makes the material un-weldable. It is not recommended to use boron in manganese steels.