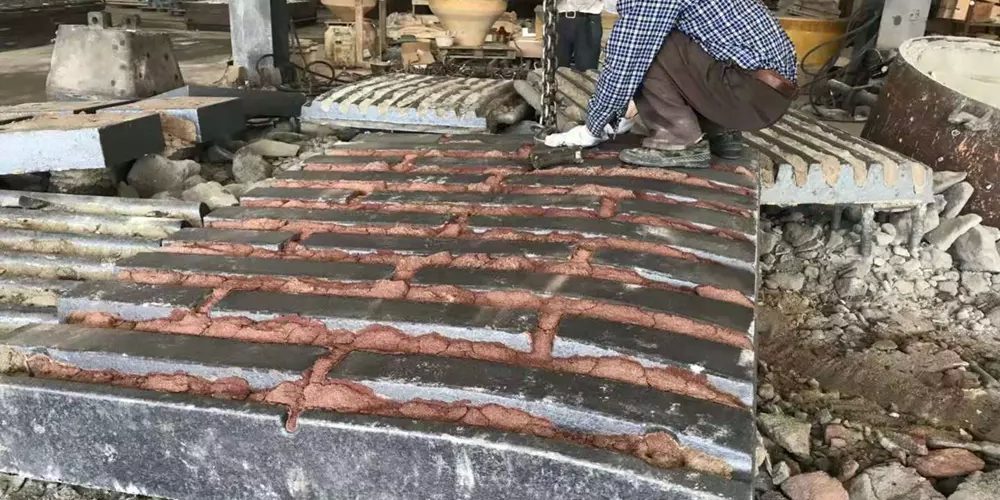 The bimetal-cast jaw plates with high carbon alloyed steel as the working layer and low carbon steel as a lining layer were introduced. The specimens made of test material were isothermally quenched at 260 ℃, 290 ℃, and 320 ℃ respectively, then their hardness, impact toughness, wear resistance was tested, and the microstructure of their joint layer was observed. The results showed that the specimen isothermally quenched at 290 ℃ has the best mechanical properties and the minimum weight loss of dynamic load wear; the joint layer of the test material exhibited good metallurgical junction with no stream blending phenomenon. The practical working test showed that the working life of the bimetal jaw plate was increased by 50%~150% compared with the high manganese steel jaw plate.

The jaw crusher mainly uses the movable jaw plate to periodically approach or leave the fixed jaw plate, so that the material entering the crushing chamber is squeezed, split and bent, and the ore is crushed and cleavaged under the action of shear stress. The face is broken. Therefore, the raft is required to have a higher initial hardness to resist the pressing and shearing action of the abrasive; and it should have sufficient toughness to relax the local stress near the crack by the deformation of the region, thereby slowing the crack. Form and expand. For a long time, most of the domestic and foreign countries use high manganese steel to make the slab. Because of the low initial hardness of the high manganese steel, although it has the characteristics of work hardening, it forms a plow in the work due to the good plastic deformation of the surface. The premature wear of the seesaw fails, and the service life of a pair of high manganese steel slabs is only 200~300 h.

Our foundry has developed a bimetal casting slab with alloy steel and lining cast carbon steel. The special casting system and casting process are used to ensure the uniformity and integrity of the composite interface and make it have a good organization and mechanical properties.

The chemical composition of the working face is designed as: w(C)0.85%, w(Si)1.2%, w(Mn) 1.75%, w(Cr) 3.50%, the non-working surface is low carbon steel, the structure is bainite + austenite + martensite, and the relative volume fraction can be according to different parts working conditions. Appropriate adjustment is made by a heat treatment process.

It is smelted in a 150 kg and 250 kg medium frequency induction furnace with a pouring temperature of 1 550 °C, wet sand casting, and a test piece of 50 mm × 30 mm × 120 mm size is cast at the same time as the mounting jaw. The low carbon steel is cast first, and after solidification to the thickness required for the process, the high carbon low alloy steel is quickly poured. In order to ensure a complete bonding layer, different cooling rates are used to control the solidification state of the material interface front to ensure a working surface layer with a full thickness.
The impact specimen size is 10 mm × 10 mm × 55 mm without gaps. The austenitic heat treatment adopts a box type resistance furnace, the austenitizing temperature is 860 °C, and the heat preservation is 60 min; the isothermal quenching uses sodium nitrate 50%+ sodium nitrite 50% salt bath furnace, and the austempering temperatures are 260 °C and 290 °C, respectively. , 320 ° C, holding for 30 min.

At 260 °C, due to the lower austempering temperature, the diffusion capacity of C is weaker, the diffusion time required to complete the bainite transformation is longer, and the distribution of C in austenite is not uniform, and stable carbon-rich austenite cannot be formed. In the subsequent cooling process, the carbon-depleted austenite transforms into martensite, the amount of retained austenite is small, and the resulting bainitic ferrite lath is small, so the impact toughness of the material is low.
When the austempering temperature is raised to 290 °C, the diffusion capacity of C is enhanced, the subcooling of bainite transformation is reduced, and the difference in free energy between the new phase and the parent phase is reduced, which is insufficient to cause more austenite to transform. In particular, it is difficult to transform high-carbon austenite with high stability, so the number of bundled bainitic ferrite is reduced, the slats are widened, the inter-slab spacing is increased, and the lower bainite is prior to martensite from austenite. Precipitation in the body divides the austenite into several parts, so that the subsequently formed martensite is confined to a relatively small range, and the martensite structure is refined. When the crack propagates to the martensite-bainite boundary, the direction changes, the resistance to crack propagation is enlarged, and the energy consumed is increased, thereby increasing the toughness of the steel.
However, when the austempering temperature continues to increase to 320 °C, there is fine needle-like lower bainite, but the tissue distribution is not uniform, which causes the impact toughness of the material to decrease.
On the other hand, as the austempering temperature increases from 260 °C to 290 °C, the ability to obtain martensite structure is weakened, the bainite transformation is shortened, the transformation speed is accelerated, and a greater amount can be obtained in the same time. Bainite; at the same time, a certain amount of martensite structure exists in the matrix, the martensite volume is larger than austenite, and the partially transformed martensite divides the nucleation and growth of the bainite, forming various phase regions. Relatively small, the processing deformation resistance of the material is relatively large, the work hardening ability is strong, and a high toughness fit is easily obtained, so the strength of the lower bainite in the mixed structure should be higher than that of the pure lower bainite. When the number of bainite is too large, the strength which decreases due to the increase in the amount of lower bainite counteracts the above-mentioned effects, and the tendency of strength and hardness decreases, and thus the strength and hardness peak. However, as the quenching temperature is further increased to 320 °C, the bainite ability is enhanced, and the amount of martensite obtained is further reduced, resulting in a decrease in hardness. 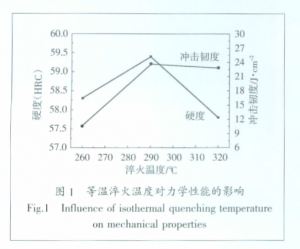 Transmission electron microscopy photographs of the composite high carbon steel after isothermal quenching at 290 °C for 40 min. Transmission electron microscopy showed that the microstructure of the test steel was bainitic ferrite slabs and the parasitic membranes distributed between them and the M-A island. In the M-A island, not only the retained austenite but also the acicular martensite of the twin substructure is used to increase the strength of the material. This is consistent with the higher hardness of the sample after isothermal quenching at 290 °C.

The parts produced by the bimetal composite casting method have a very important influence in combination with their service life. In order to obtain a good composite interface between low carbon steel and high carbon alloy steel, the composite layer must form an effective metallurgical bond. Figure 3 shows the microstructure of the bimetallic composite joint. It can be seen that the two metals are well bonded. Due to the crystallization of low carbon steel during high carbon steel casting, under the action of high-temperature steel, low carbon steel is only a very thin layer of surface melting, which is a solid-liquid combination, so in the process of solidification, low carbon steel and high Carbon steel has obvious bonding traces, and its interface structure is dense, which confirms that the intermediate bonding layer is an effective metallurgical bond, and there is no mixing phenomenon in the composite interface. 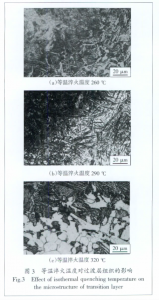 When the austempering temperature is 260 °C, the material has high hardness, but the toughness is relatively low. Therefore, a large number of fatigue cracks will occur under the repeated action of the external force of the material surface, causing the material to peel off; when the austempering temperature is 290 °C, The material has good structural and mechanical properties. Therefore, it can resist the cutting of quartz sand abrasive grains during wear and can reduce the peeling of surface metal and exhibit better wear resistance. Steel with austempering temperature of 320 °C has good plastic toughness and high hardness, and the dispersed carbides have a higher hardness. It can be supported in the matrix and can hinder the penetration or cutting of abrasive grains. Therefore, when the quartz sand particles interact with the base metal during the wear process, the plowing effect is not obvious, so the material loss is relatively small.

The installation test of the bimetal composite casting raft was carried out on a PE-750×1060 crusher, which showed high wear resistance in different abrasive materials, compared with similar high manganese carbon steel materials. The service life of the product is increased by 50%~150%.